A New Level of Hygiene
The luxury AquaBliss SF220 Inline Shower Filter features a Multi-Stage Filtration System guaranteed to
purify your shower water at any temperature. It removes chlorine and other harmful impurities, traps heavy
metals, such as lead, mercury, nickel, chromium, and inhibits the growth of organic substances such as
bacteria and fungi. You will immediately notice that the water feels softer, soap and shampoo lather up
better, your skin and hair feel rejuvenated and tangle free, and the chlorine odor is gone!

Greatly Reduces Chlorine Levels
Utility companies add chlorine to your water supply to kill bacteria. But this chlorine-treated water is bad
news-it causes dryness and flaky skin, brittle, damaged hair, and inexplicable fatigue. Especially when
unfiltered hot water turns to steam, and vast amounts of chlorine enter the body via skin pores and
inhalation. Prolonged exposure to chlorinated water could then lead to respiratory illness, skin disorders,
such as acne, and other serious health risks.

Multi-Stage Combination Filter System for both Hot and Cold Showers
The SF220 uses a proprietary mix of KDF-55, Active Carbon and Calcium Sulfite to filter the water.
KDF-55 works particularly well in purifying the water at higher temperatures. Activated Carbon charcoal
removes chlorine and other impurities in lower water temperatures. Calcium Sulfite is extremely effective at
removing chlorine in both hot and cold temperatures.

Easy DIY No-Tools Installation and Replaceable Cartridge Filter
The SF220 has universal 1/2" connections that easily and securely connects to your standard fixed,
overhead rainfall, hand-held or combo showerhead. The shower filter cartridge lasts six to eight months
(or after 10,000 - 12,000 gallons of water use) before it needs changing, to ensure optimal performance. 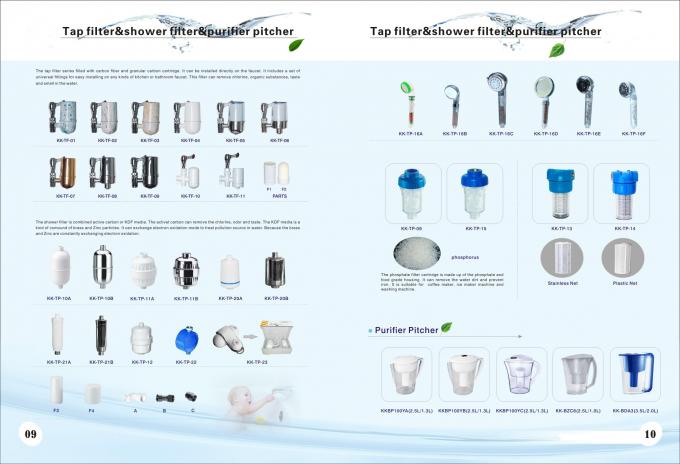 WHY I WANTED TO USE A SHOWER FILTER:
1. I wanted a shower filter to remove chlorine and the cloudy white build up on shower screens.
2. I wanted soft, healthy skin and hair (particularly a problem for me in the winter).
3. I read that a body absorbs more chlorine during a shower than by drinking a glass of tap water.
4. A long, hot shower equals steam inhaled into lungs contains chlorine and disinfectant by products.

ABOUT THE COMPONENTS OF THIS FILTER:
I am not a water filter expert (other than having an understanding of the role carbon plays as a filter). With that in mind, I did some research on the components of this water filter. I have included some of my findings below:

KDF 55:
"KDF water filtration media is a high-purity alloy of both copper and zinc. KDF media (or Kinetic Degradation Fluxion Media), is a chemical compound used in water filtration applications. KDF is often used along with activated carbon to maximise the filters efficiency. Generally KDF is used in a purification system as a pre-filter, before another, finer stage of filtration...Since its development in 1984, it has grown to be widely regarded as one of the best filtration medias available" (Wikipedia).

CARBON:
"Carbon filtering is a method of filtering that uses a bed of activated carbon to remove contaminants and impurities, using chemical adsorption. Each particle/granule of carbon provides a large surface area/pore structure, allowing contaminants the maximum possible exposure to the active sites within the filter media